Yes, Even US Import Taxes Have Gender Bias (Opinion) 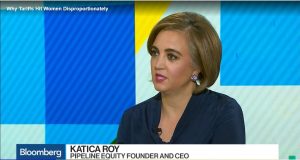 Katica Roy is the CEO of Pipeline Equity. The views represented here are her own and do not necessarily reflect the opinion of Bloomberg LP and its owners.

If you picture the gender pay gap as a three-legged stool, the pink tax is leg number three. It’s the demand side of wages, and it results in women giving up larger shares of their wallets than men for similar products. Shampoo, jeans, wool socks, ball-point pens, you name it. The pink tax is a form of gender-based price discrimination and women have been paying it for decades.

Multiple factors contribute to the pink tax. One sneaky factor? U.S. import taxes. Our country’s tariff code has inequalities written directly into it, and now is prime time to talk about not the import taxes themselves, but their gendered impact on our country.

When the U.S. imports goods from other countries, it places fees on those goods. This practice is nothing new—our first Congress signed The Tariff Act of 1789 into law as one of their initial pieces of legislation. Congress had good intentions for the tariffs. Doing so gave our new democracy a source of revenue with which to operate. It also helped pay down Revolutionary War debt.  In 1930, with the passage of the Smoot-Hawley Tariff Act, Americans began paying tariffs on apparel and footwear.

Import taxes are not inherently gender-discriminatory. What’s discriminatory is the consequence of determining which imports are fined and at what rate. This process creates the “tariff gender gap.” Here’s how it works.

The United States imposes tariffs by first sorting each piece of incoming merchandise into a statistical category. It then assigns each category an applicable tariff rate. These rates get published in the Harmonized Tariff Schedule of the United States Annotated (HTSA) and once published, only Customs and Border Protection can provide legally binding advice or rulings on the import classifications.

Take a look at the 2019 HTSA  and you’ll find 98 chapters divided into 22 sections—each dealing with a specific type of good. The complete tariff list, where each item represents a unique 8‐digit subheading, runs more than 190 pages long. The HTSA is complicated, and gender provides one avenue for the United States International Trade Commission (USITC) to classify goods. A good becomes gender-classified when its product description includes the sex of the intended consumer. In 2014, that meant 86 percent of U.S. apparel imports and 79 percent of US footwear imports received a classification based on gender. On average, imported male clothing is taxed at 11.9 percent. The rate for imported female clothing? 15.1 percent, more than 3 points higher. Because companies often pass these higher costs onto consumers, women are more likely to pay higher prices at the store.

According to the courts, Congress had no intention of using tariffs to discriminate by gender. The courts do not, however, mention the effects the import taxes have on each gender. So while their intention may not be discriminatory, their impact is.

Although men and women both feel the pain of tariffs, research shows the burden largely falls on female consumers.

In 2015, roughly 75 percent (representing $8.9 billion) of the total tariff burden to U.S. households came from apparel products. Of the total apparel burden, women’s apparel burden came at nearly twice the burden of men’s: $5.8 billion versus $3.1 billion, respectively. Zoom in and you’ll find women’s per household apparel burden ranges from $69 to $86 while men’s ranges from $33 to $42. In other words, gender-classified imports resulted in U.S. consumers giving up $2.77 billion more for women’s clothing than men’s. And that $2.77 billion was in 2015 alone.

Tariff-based gender discrimination goes both ways, hurting women and men. Consider men’s bathing suits. Those receive a 28 percent tax versus the 12 percent on women’s. Or consider that the duty on men’s woven wool shirts, 18 percent, nearly doubles that of women’s.

The majority of all apparel and footwear sold in the US are made overseas (97 percent and 98 percent respectively), and apparel and footwear combined accounted for only 6 percent of US imports yet half of all tariffs collected in 2017. As the tariff burden continues to grow for both genders, it’s worth questioning if, and how, the impact of tariffs help U.S. consumers and the economy as a whole.

The government “earns” money from tariffs. In 2006, it collected:

Unlike the government, U.S. consumers do not earn money from tariffs. It’s the opposite: tariffs penalize them. The cost of import duties on consumers far outweigh the revenues they produce and the benefits they generate for U.S. industries. To quantify an example, turn to the U.S Bureau of Labor Statistics. It reports that 574,130 employees work in apparel and footwear manufacturing nationwide. Knowing that apparel and footwear tariffs generate nearly $14 billion per year in revenue, U.S. consumers are paying the equivalent of $24,384 in taxes annually for every apparel and footwear manufacturing job. The government could provide retraining or other industry support for a fraction of the cost. Or if the government really wanted to increase U.S. influence, it might consider eliminating the U.S. apparel and footwear tariffs, thus expanding U.S. markets to developing countries which are the major source of these imports.

Tariffs also touch at labor force participation. Economic history shows the connection between labor-saving appliances and women’s entrance into the workplace. The most recent trade deals will see U.S. consumers paying more for items such as refrigerators, vacuum cleaners, and washing machines. As economist Ha-Joon Chang from the University of Cambridge states, “Without the washing machine, the scale of change in the role of women in society and in family dynamics would not have been nearly as dramatic.” In 2018 alone, U.S. tariffs led to a 12 percent increase for washing machines, the U.S. government netted an additional $80 billion dollars while American consumers paid a projected $1.5 billion extra in higher prices. This increased tariff burden hits families and places the increased load on women’s unpaid work.

Finally, and riding on the back of gender-based discrimination, studies find that tariffs disproportionately burden single parents. In fact, 58 percent of children living in poverty are living in households headed by single moms and the poverty rate for single moms is more than twice that of single dads (34 percent and 16 percent respectively). When women, single parents especially, carry the burden of imported goods, it results in them keeping less of their earnings in their wallets. Since a parent’s income influences children’s future earnings, whether or not they go to college, and if they become teen parents, import taxes spell trouble for everyone.

From her children, who depend on Mom for their social and economic well-being. To her workplace, whose financial performance reaps the rewards of increased gender equity. All the way to her economy, which over the past 30 years added $2 trillion to the US economy through increasing female labor force participation. Everyone suffers under the weight of gender-classified import duties.

An Equitable Solution to Import Taxes

Congress could solve the discriminatory impact of import taxes one of two ways. The first option: mandate that importers pay whichever is lower, the men’s tariff rate or the women’s tariff rate. The second option: remove rate differentials on gender-classified imports. Either way, Congress must correct for the capricious gender differences written into our country’s tax code.